Day 01 : Jaipur
Arrival at Jaipur, We will pick up from Jaipur Railway station or Airport then transfer to Hotel. Jaipur offers a plethora of touristic attractions to the traveler. The City Palace in the heart of Jaipur is known for its blend of Rajasthani and Mughal architecture. Not far away is the Central Museum with its large collection of woodwork, jewellery, costumes, brassware, and pottery. The Hawa Mahal or the Palace of Winds was constructed for the royal ladies to watch the royal processions without being seen. Later Visit Birla Temple, Albert Hall etc. Overnight at Hotel

Day 02 : Jaipur
Early morning after breakfast drive to Amber Fort, Take the Elephant Safari at the Royal Amber Fort. Later proceed to visit the Jaigarh Fort which displays a beautiful mix of Mughal and Rajput styles of architecture. Another monument near the City Palace, Jantar Mantar, is the largest of the five observatories built by Sawai Jai Singh. Hawa Mahal the “place of wind” . You can also enjoy the walks in the Markets of the Pink City to enjoy the Heritage View of the City and to know the culture of us. Water Palace which was a resting place for the kings in past. Overnight in Hotel.

Day 03 : Bikaner (335 kms/05 hrs)
Morning drive to Bikaner, Bikaner, situated in the northern part of Rajasthan, The city is surrounded by high fortifications comprising a seven-kilometers long wall which encircles the old city and has five entrances-all constructed in the 18th century. after sightseeing tour of Bikaner, Bikaner offers several attractions to the tourists besides, of course, the exotic camel safaris. You can visit the majestic forts or go to the Mata Karni temple where rats are considered sacred and worshipped. The camel festival held in the month of January is also an event worth witnessing. Some of the major attractions around the city are Junagarh Fort, Camel Breeding Farm and Ganga Golden Jubilee Museum. Overnight in Hotel.

Day 04 : Jaisalmer(329 kms/04.30 hrs)
Morning After breakfast drive to Jaisalmer, Jaisalmer is an important destination of the western state of India, Rajasthan. A desert city, it was founded by the Bhatti Rajput chieftain Rawal Jaisal in the year 1156. Jaisalmer could be regarded as the western sentinel of entire India and a place worth visiting to get an idea of the native Rajasthan. Located at the heart of the great Thar Desert, it offers the visitor an enchanting world of fable, colour, and history. Moreover, the magnificent wood-and stone-carved mansions and buildings display the love and interest Rajputs had for the fine arts. Rest of the day free for leisure. Overnight in Hotel.

Day 05 : Jaisalmer
Morning sightseeing tour of Jaisalmer The golden rays of the setting sun, the colorfully adorned locals, the massive forts and mansions, the extremely fascinating craftsmanship, Rajput havelis, all these make Jaisalmer a place of must visit in Rajasthan. Moreover a visit to the Jaisalmer Fort (the second oldest fort in Rajasthan after Chittaur), Patwon ki Haveli, (the grandest haveli of Jaisalmer), Desert Culture centre and museums gives you some glimpse of this small town's past. The Jain temples meet your religious taste; Salim Singh ki haveli and Nathmal-ki-haveli give you some more idea of the haveli architecture of the town. Besides these, Gadsisar Lake is also an interesting spot that you must visit in this desert city. Afternoon visit Sam Sand Dunes, Ideal for viewing sunsets, these sites will also give you a chance to capture the picturesque sand dunes in your camera. Overnight at Hotel

Day 06 : Jodhpur (307 kms/04.30 hrs)
After Breakfast Morning drive to Jodhpur, Famous for its magnificent forts and palaces, Jodhpur is the second largest city of Rajasthan and a major tourist attraction in the country. After sightseeing tour of Jodhpur, The forts and palaces in the city are the major source of attraction in the city. Exploring the forts gives you a feel of the times when the Rajput might was at its peak. The gates and the walls of the forts speak of the battles they have witnessed. One needs to spend enough time with these historical monuments to fully grasp the grandeur of the Rajput era. Some of the major attractions around Jodhpur are Mehrangarh Fort, Jaswant Thada, Umaid Bhawan & the Government Museum and Zoo. Overnight in Hotel

Day 07 : Jodhpur - Udaipur (255 kms/04 hrs)
After Breakfast drive to Udaipur, on the way visit Ranakpur and then drive for Udaipur arrive in Udaipur and check in to Hotel , Relax ,After Relaxing in your hotel, later in the evening proceed for boat ride at Lake Pichola and return back to hotel.

08 Day : Udaipur
After lovely breakfast, proceed for a city sightseeing tour of Udaipur. The city is built in 1559 A.D. by Maharaja Udai Singh and has been described as the most romantic city of Mewar Region on the banks of Lake Pichola and surrounded by the Hills of Aravali Mountains Range. The Aravalli Mountains is the oldest in the world after Himalayas. During your tour to city you will visit the (City Palace the largest Palace complex of Rajasthan and famous Jagdish Temple, Vintage car Museum, Sahelion Ki Bari the fountain Garden & world famous Puppet Museum ( Lok Kala Mandal ) and Pratap Smarak. Overnight at Hotel

Day 09 : Udaipur and departure
In the morning take breakfast then drop at Airport or Railway station as per your departure schedule. 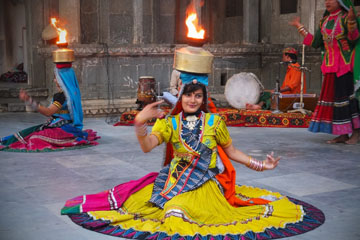